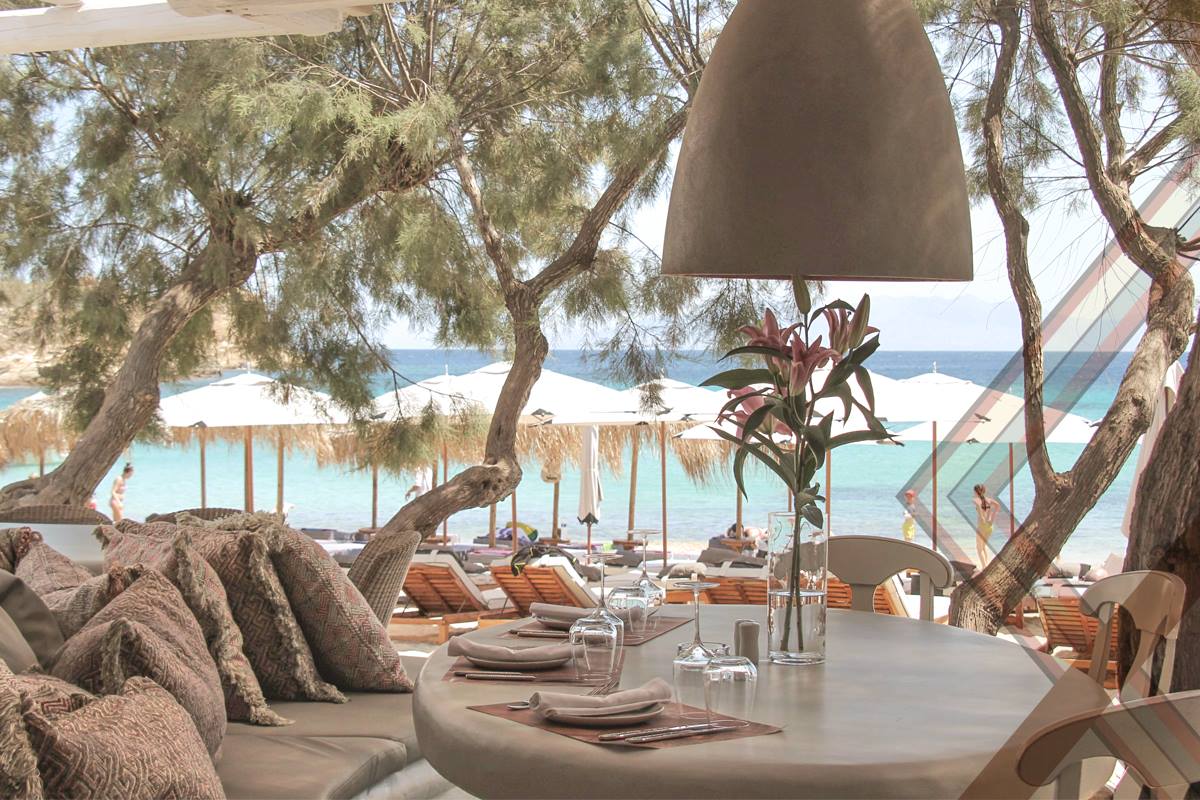 The 21 Best Beach Clubs, Bars, and Nightclubs in Mykonos

Perched on a cliff overlooking the sea, this is the most legendary of Mykonos’ out-of-town clubs. Its huge open-air dancefloor heaves with revellers from the wee hours of the morning, when action in Mykonos Town winds down, until dawn. Nightly DJ sets attract international talent such as Oliver Heldens, Nicky Romero and Ingrosso. Advance bookings highly recommended. Shuttles to/from Mykonos Town. Calendar of Events.

Overlooking the sea, this is the best gay bar in Mykonos Town and a popular sunset-watching spot (for everyone). Entertaining drag queen shows are held nightly, while the JackieO’ Beach Club overlooking Super Paradise Beach is great for lounging around the pool and Jacuzzi and then partying it up at the weekly fashion-themed parties, involving resident artists and guest DJs.

Gay and straight clubbers alike flock to this renowned gay club, known for its fun themed nights, a good mix of oldies, latest chart toppers and techno, and regular drag shows. The breezy sitting area overlooking the water is a peaceful spot to catch your breath and sip a cocktail after a bout of frenetic dancing.

Going strong since 1983, this bar in Little Venice is a favourite for watching the setting sun glide over Mykonos Town’s picturesque windmills while sipping one some of the best cocktails on the island. After sundown, the bar lives up to its name, with live piano music, camp cabaret and torch songs belted out by the likes of Kathy ‘Babe’ Robinson until the early hours of the morning. Good for a romantic night out.

A fixture on the Mykonos nightlife circuit for almost 40 years, this popular bar attracts predominantly a younger crowd. There’s an open-air patio for downing some of the most reasonably priced standard cocktails in town, or shots of ‘slippery nipple’ and ‘sperm’ before kicking things up a notch on the thumping dancefloor.

A fixture of Mykonos Town nightlife for 30 years, Astra is a curious blend of lounge bar and hip club. Early in the evenings, it’s a mellow spot for a drink, but as the night progresses, things heat up under the enchanted fibreoptic ceiling that mimics the night sky of the northern hemisphere and pulses in time to the music. Astra attracts the likes of Monaco’s royalty, supermodels and designers; to get in, dress nicely or be Keith Richards.

Swanky but not overly pretentious, in the evenings this glam cocktail bar attracts the young and the beautiful, who cluster around the tall tables outside. The handcrafted signature cocktails are worth the splurge, particularly the ones involving champagne. There’s some DJ action later on at night, but for many this is an evening warmup spot before hitting one of the megaclubs out of town.

In one of the picturesque houses hanging above the water in Little Venice, this bar is owned by the first female Greek naval captain and her family. There’s a lively seafood restaurant here as well, run by her son Konstantinos, but many customers come to sip cocktails while enjoying the sunset views from the waterfront balcony.

One of the most atmospheric cocktail bars in Little Venice, Galleraki perches right above the sea. Go for candlelit seating on the balcony, overlooking the water, and choose one of the excellent signature cocktails – anything with fresh fruit is good, particularly the ‘katerinaki’, made with melon. The champagne cocktails are pricier but worth the splurge. Popular with couples.

Remezzo has worn many hats during its 50-year existence. An international jet-setter magnet for many years, the place is renowned for partying till dawn, with guest DJ sets and partygoers from Athens and elsewhere. Now revamped to include a high-end seafood restaurant, a cocktail bar, and a waterfront lounge with comfy seating, Remezzo has broadened its appeal.

Late into the night, revellers bump shoulders to classic R’n’B and mainstream tunes played by the resident DJ on the tiny dancefloor next to the bar. While some of the staff won’t win any prizes for congeniality, there’s a long list of decent, reasonably-priced cocktails, and there’s a fun vibe once the party gets started.

If you’re looking for a break from incessant clubbing and bar hopping, Cine Manto, in the heart of Mykonos Town, might be just the ticket. This appealing open-air cinema in a tranquil garden setting screens movies in their original language, and there’s a good restaurant on-site as well. Also plenty of beer, wine, and cocktails.

On a tiny street in the heart of Mykonos Town, this is a chilled out café by day, with a cluster of tables under the trees outside. Come night, the place livens up with regular DJ sets, and remains fun and unpretentious, unlike some of the town’s other bars that look down on casual attire.

Debuting in the summer of 2017 in Mykonos Town, this sleek and stylish new kid on the block has been attracting a lot of attention. It’s a place on three levels, with two bars, curvy furnishings, ample dancefloor space and an atmospheric lighting installation, “the void”, that makes the ceiling look like the night sky. DJ talent include Damian Lazarus, Jackmaster and Seth Troxler; expect plenty of deep house and techno.

Relatively new on the night scene, @54 is a gym by day and lounge bar and dance club by night. Predominantly gay, but not exclusively so, it’s a fun, friendly place with cutting-edge décor and plenty of mirror balls. The music is old-school disco with some house mixed in, and there’s an appealing outdoor terrace for sunset-watching.

Operating on the very spot made famous by the blissed-out 1970s hippie generation, Kalua has been holding heaving beach parties on Paraga Beach for 14 years. Their motto – “Every day is a beach party!” – says it all. The crowd tends to be young and energetic, with beats pounding until sunrise. During the day, beachgoers are served Kalua’s signature Kalua Watermelon cocktails by the highly trained bartenders.

An icon on the nightlife circuit, this megaclub boasts its own private beach. It’s a mellow place by day; most of the action takes places after midnight. Expect white-on-white décor, all-night DJ sets and some serious international talent, from Marlo and Helena Legend to Ministry of Sound, Tiesto and Nervo. Serious clubbers come to Mykonos just for this. Regular shuttles to/from Mykonos Town.

A straight-up party institution on its very own private beach, Super Paradise attracts a contingent of celebrities, models and hardcore clubbers with its nightly DJ sets. During the day, things are more mellow – ideal for a bit of lazing on the sand with a drink in your hand. Music typically kicks off in the afternoons, though spontaneous parties have been known to erupt at any time. Regular shuttles to/from Mykonos Town.

The recipient of the Sexiest Beach Bar award by the Travel Channel in 2012, Tropicana stays true to its calling, attracting plenty of young and beautiful people in swimwear who come to chill out on the beach by day and party from 4.30pm onwards, when the DJs take over the decks. The outdoor dance space heaves until 5am, giving hardcore partygoers time to hit a couple of the other clubs for an hour or two before calling it a night.

An excellent seafood restaurant by day, and a good place to lounge on the beach with one of the bar’s signature cocktails, come sundown, Scorpios morphs into a hedonistic club. As part of the club’s ‘sonic journeys’ programme, there’s something on every night, from DJ sets by international talent such as Bedouin and Sneaky Sound System to Saturday night residencies by Mykonos’ top DJ, Valeron. Festivities wrap up by midnight, making it a great start to a night out.

The best swimming and sand of any of the big name beach clubs. Luxe, relaxed, and surprisingly family-friendly (through the day). Good food and reasonable prices for sunbeds (€15 each, €25 for the front row) compared to Nammos or Scorpios. House music plays all day long. Lohan’s is a €30 taxi ride from Mykonos Town and there’s no public transportation. The effort it takes to get here ensures that it has a more refined and secluded vibe.

You don't have permission to register